BRIDGETOWN COMMUNITY ASSOCIATION
Disclaimer: This webpage contains information about the City of Olive Branch's annexation plans and efforts by groups to stop the annexation. It is not intended to be an all-encompassing source of information regarding all efforts being done by all groups. The Bridgetown Community Association Board does not endorse nor sanction any one annexation group.  Accordingly, annexation information posted on Mybridgetown.org and on the Bridgetown Community Association Facebook page does not constitute official endorsement, unless otherwise specified. 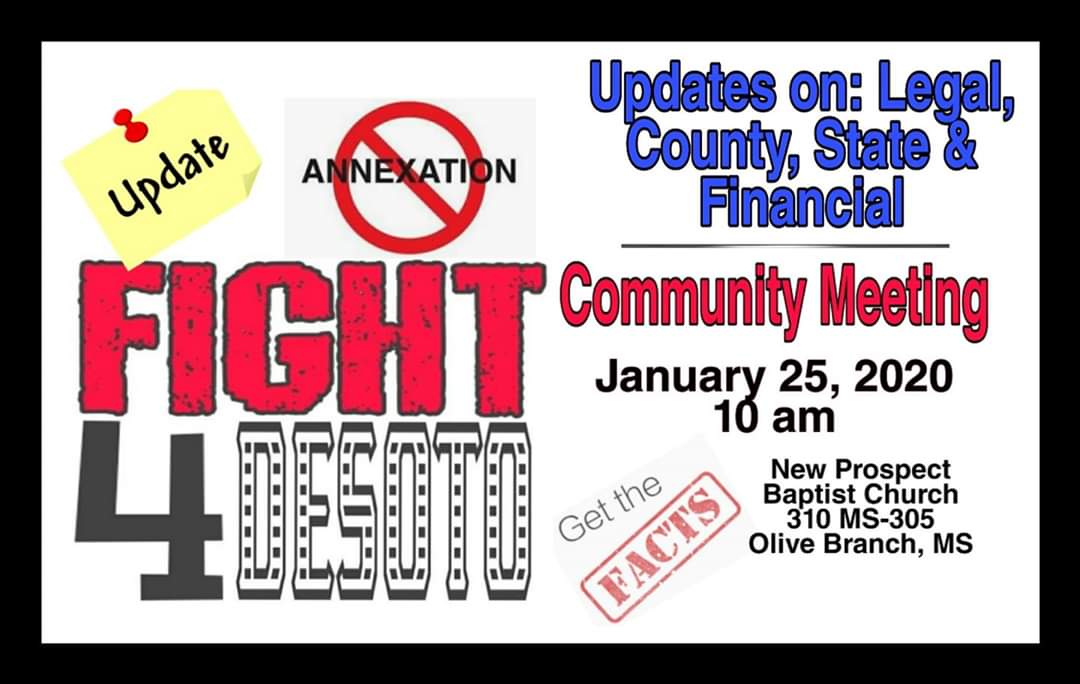 ​ "It's been a quick 3.5 months since our community showed up in court to oppose the annexation attempt by Olive Branch. During these last 3.5 months the UCDC attorneys have been focusing on building our case to win in court. We have already had small wins, being that our case was postponed until next March, saving you at least 1 year of increased taxes. The efforts of UCDC thus far have saved members in the annexation path an estimated $1200-$1800 for 2020 (property taxes + vehicle registration).

This week the attorneys working for UCDC have filed with the court and delivered UCDC’s first request of written discovery. The first filing was delivered to all interested and registered parties, including additional attorneys who oppose the annexation and to the City of Olive Branch. This document establishes expectations with Olive Branch that UCDC expects to have full disclosure on all information that may be or have been used by Olive Branch to justify their attempt to annex portions of the county. This information would include conversations, minutes, documents and maps relating to the planning of the annexation, comprehensive plans, lists of expert witnesses, budgets, etc. Having this information will enable UCDC to fully understand how OB plans to try to service our area, how they will execute financially and why they believe there is a need to bring our areas into the city. The is the first step of discovery, which is only the beginning of building our case to oppose the Olive Branch annexation. As we receive information, our counsel will then determine if it is relevant and what our position should be.
​
Over the next few months our attorneys will be focusing on defending our position of opposing the annexation with factual evidence . We must not forget that it is Olive Branch’s responsibility to prove the 12 Indicia’s of Annexation (they do not have to prove all of them) in court, UCDC will be working to disprove them.

No court action will take place until next year.  The April 17 hearing set deadlines for both sides to line up experts and for evidence discovery ahead of an actual trial date.  There were more than 8 lawyers representing various parties against annexation.

DEADLINE/TIMELINE:
August 30, 2019:  Olive Branch must submit its expert witness list on or before August 30, 2019.
September 15, 2019: All challenges related to the annexation filing must be filed by September 15, 2019.
November 20, 2019: A Discovery Conference set for 9:00am at the Tate County Courthouse.
November 30, 2019:  All other parties must designate experts on or before November 30, 2019.
March 31, 2020: Deadline for completion of all discovery.
April, 2020:  Case Status Conference. Court will consider the status of proceedings an set the matter over for trial.  (A Specific date for the conference will be selected by the court something before April.)

It is likely a trial may not occur until end of 2020, but possibly not for a number of years.

78 people who attended the April 17 hearing officially registered as objecting to annexation.

UCDC Update: The nonprofit organization called “Unincorporated Citizen of Desoto County” (UCDC - Fight4Desoto) announced it secured an attorney to fight for your right to remain a citizen of unincorporated Desoto County.   MayoMallette, a law firm out of Oxford, MS has been hired to represent citizens in the unincorporated area in their fight against Olive Branch’s annexation plans. The lead attorney representing UCDC will be Pope Mallette and joining him is Paul Watlins Jr also of MayoMallette.
Pope Mallette came highly recommended and upon further research of potential attorneys was found to be most qualified.  Mallette is an attorney with a strong background in municipality, zoning, ordinance, real estate, and annexation.  Mallette currently serves as the Oxford City Attorney and has been involved in Oxford annexation cases for several years.  We feel his background representing a city in annexation cases makes him uniquely qualified to understand both our burden of proof as challengers as well as the capacity to support this growth that the city must demonstrate.
For more information on Pope and Paul’s legal experience please visit http://www.mayomallette.com/
The UCDC point person for legal inquires is Carissa Shumaker. Carissa can be reached at mylewisburg@gmail.com
As always, the citizens of the unincorporated Desoto County area are highly encouraged to make donations to the legal fund. The legal expenses associated with this case will be ongoing, as will the representation for your best interest against the annexation.  If you have not donated, please consider making your donation today at www.fight4desoto.com

Organized Effort: The UCDC (Unincorporated Citizens of Desoto County) was created by people in the proposed annexation area to join forces and resources to fight being annexed by Olive Branch. Members run the Fight4Desoto Facebook page and Fight4Desoto.com. It has filed for non-profit status and is raising money to pay for an attorney to fight the annexation.
Legal Representation:  Annexation cases are complicated and require legal representation from attorneys that understand the process. The lawyer which will represent Unincorporated Citizens of Desoto County charges $275 an hour.  Legal expenses could reach $150,000!
Donations: Fight4Desoto is asking people who live in the annexation area to donate $100 or more to help pay for the attorney.  You can donate by mailing a check to UCDC Legal Fund, 3845 Goodman Rd E #19, Southaven, MS 38672.  You can also pay online by going to this website: https://squareup.com/store/fightfordesoto
Bridgetown Community Association Support: The Bridgetown Community Association is hosting a fundraiser for Fight4Desoto on Saturday, April 20.  The Fight4Desoto Bunny Run 5k & 1 Miler starts at 9am at the Community Center.  Registration fee is $25 and will be used for legal expenses to fight annexation.  Businesses are encouraged to sponsor the race. You can register at this website. https://squareup.com/store/fightfordesoto
Where can I get an Anti-Annexation Sign?  Fight4Desoto is selling signs on its website. https://squareup.com/store/fightfordesoto. The $60 purchase includes a $50 donation to the legal fund.  Signs will also be available to purchase at the Bunny Run on April 20th and other events. T-shirts are also available on the website.
The best way to fight annexation is to fight together.  Bridgetown residents can monitor the Bridgetown Association Facebook page or the annexation section on MyBridgetown.org for updates.  Emails can also be sent to Board@MyBridgetown.org.

The Desoto County Board of Supervisors approved a resolution to draft a local bill involving annexation that will be submitted to state lawmakers.  The resolution would require a vote of people in a proposed annexation area before annexation can move forward.  The bill must be submitted by March 15.  If passed it would apply only to Desoto County.  Because it is restricted to just one county, it has a better chance of being approved.   People are being urged to contact state lawmakers to ask them to approve the bill.
UPDATE FEB 16: FIGHT4DESOTO
The group Fight4Desoto was created for the citizens of the unincorporated areas of Desoto County.  It has filed for 501(c)(3) nonprofit status as UCDC.  The organization is raising money to hire a lawyer to fight annexation.  It is asking residents in the annexation area to contribute $100 to help pay for the lawyer.  The Bridgetown Community Association's lawyer told the Association that it can't give money to an organization that it doesn't have complete control over all finances.  The Bridgetown Community Association can and will use resources to notify Bridgetown residents about anti-annexation efforts.
Click HERE for the link to the Fight4Desoto webpage

Members of the group Fight4Desoto are holding a meeting Thursday, January 31 at the Bridgetown Community Center at 7PM. This meeting will allow for a local small group setting so peiple can ask specific questions regarding annexation vs attending Saturday’s large group meeting. 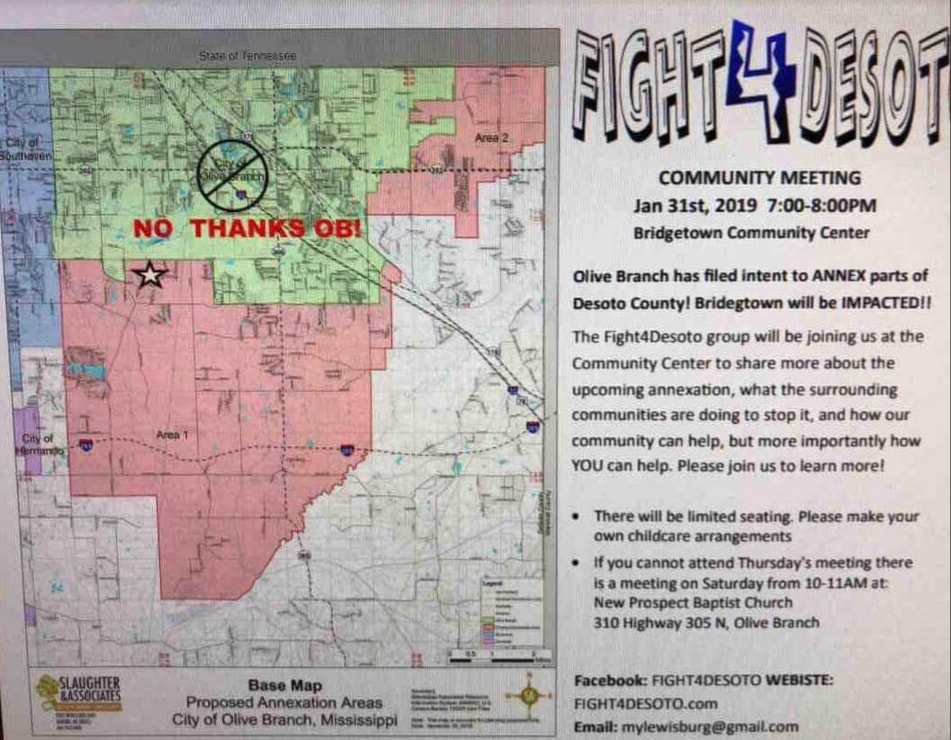 ​The City of Olive Branch voted on November 20, 2018 to begin the process of annexing approximately 50 square miles of unincorporated DeSoto County. The Annexation area includes Bridgetown.

​Many HOAs in the annexation area are joining forces to fight the annexation. Some of those HOAs are considering fighting annexation and also incorporating themselves into a new town possibly called Lewisburg. Becoming a town would most likey require paying town taxes that would be higher than Olive Branch taxes.

The Bridgetown Community Association Board of Directors asked for input from Bridgetown residents to determine how to proceed. 95% stated they wanted to fight annexation and stay in the county.  Thank you for participating.
Anti-Annexation meeting to be held Feb 2, 2019:  hosted by group "Fight 4 Desoto" 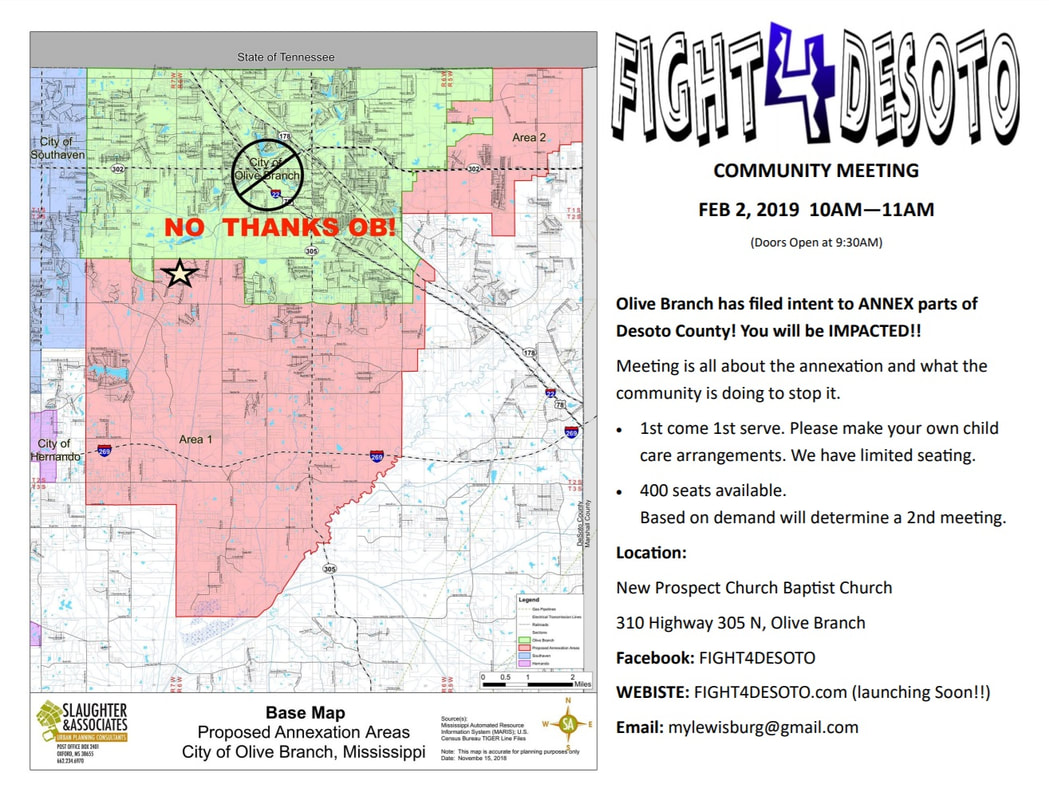 A hearing about Olive Branch's annexation plan is set for 9am on April 17, 2019. This is not a trial, but a hearing to determine the number of people who object to the annexation.  The Bridgetown Community Association is working with a State Representative and other communities to fight being Annexed. Please monitor Facebook and this website for more information as it becomes available. ​ 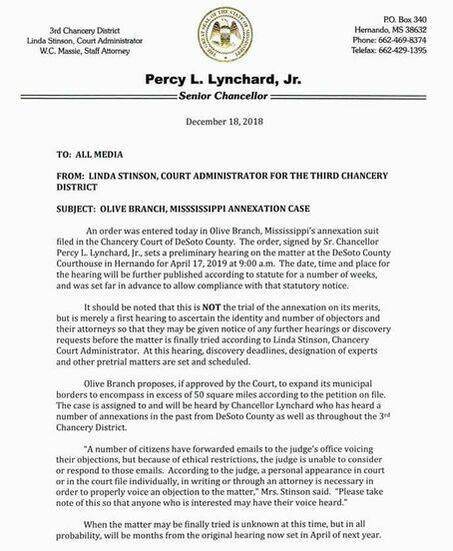 DeSoto Times Nov. 22, 2018
Olive Branch starts annexation process
​By BOB BAKKEN
The growing city of Olive Branch is about to grow again... literally.
Aldermen at their Tuesday night meeting approved an annexation ordinance that starts the process to add two areas to the city.

One is an area south of the current city limits that consists of Pleasant Hill, Bridgetown, Lewisburg and Cedar View communities.  The other area is east of the current city limits and makes up the Center Hill community.
Once completed, Olive Branch's population would grow by about 14,000 residents and would add 50 square miles and about 5,000 homes.
​
"This is something we have been working on for more than 20 years and it is about to come to fruition," said Mayor Scott Phillips Wednesday morning about the action.
The city must still file a petition in DeSoto County Chancery Court to start the process and public notice of the court proceedings will be provided as the law requires.

The last time Olive Branch took the move of adding this amount of land inside its city limits came in 1996, when the city's boundary was extended west to Malone Road.  School attendance zone boundaries are not affected by the move.
Olive Branch officials stated the basis for their move is that it has spent millions of dollars adding utilities during the past two decades.

The proposed areas have been eyed as part of the city's future growth plans during that time.  City officials believe it has been that ability to offer services that has helped the affected areas grow to the point where the county has doubled in population in the past 20 years.

Olive Branch already provides fire protection services in much of the proposed annexation areas, either as the primary or secondary provider. It was pointed out that some homeowners may see lower insurance premiums as a result because Olive Branch will now bring their property under its 24-hour fire department coverage.  Annexation does come at a cost to the residents affected, however. Ad valorem taxes on real property and automobile tags would likely increase for those new residents of Olive Branch.

For instance, a home with an appraised value of $160,000 would see their estimated city property tax become $616. A residence valued by the County Tax Assessor at $240,000 would face a city property tax bill of $924 annually and the figure becomes $1,232 for a home valued at $320,000, city officials estimated.
They were quick to point out, however, that Olive Branch still has the lowest tax rate of the four largest DeSoto County municipalities.
​
Information about the annexation has been provided on the city's website, including the base Map of the area affected, and overview of the annexation and the ordinance that was enacted Tuesday evening. 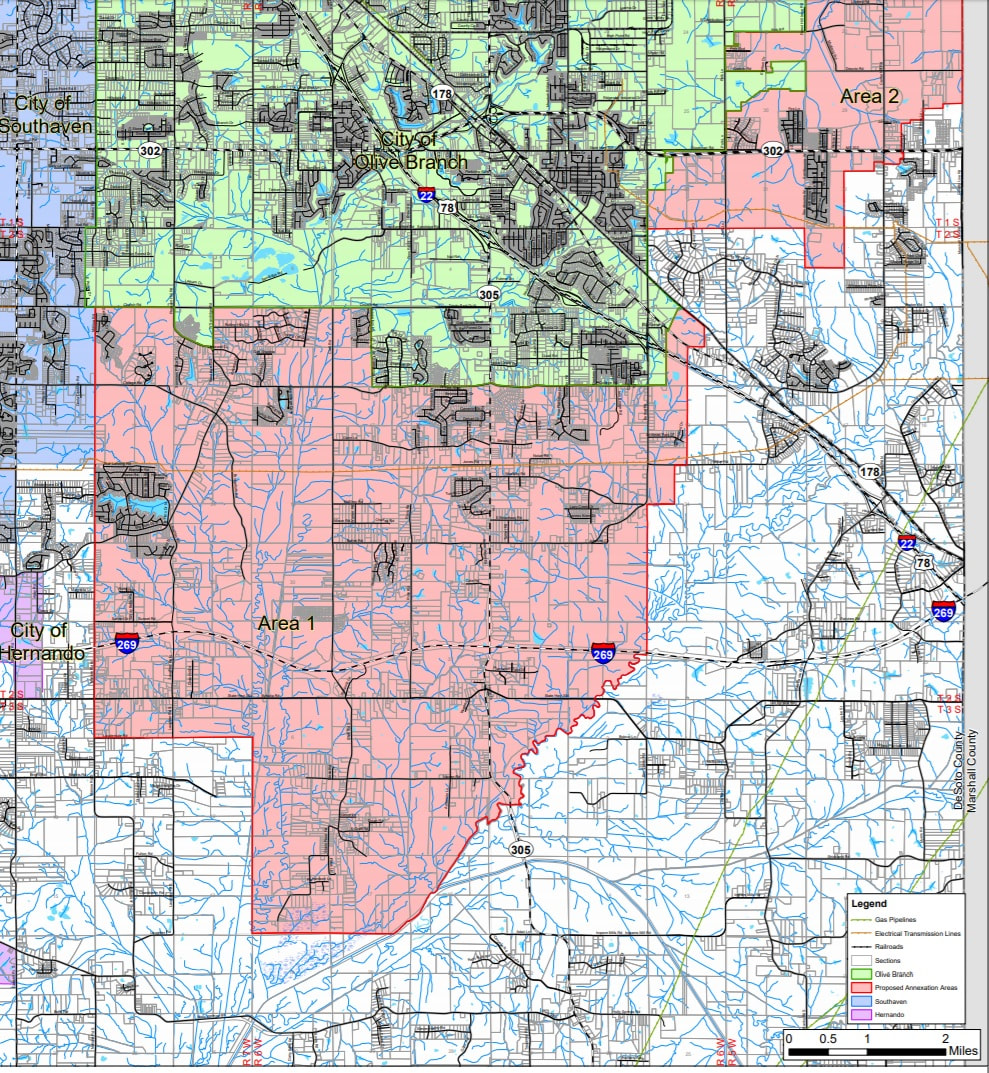 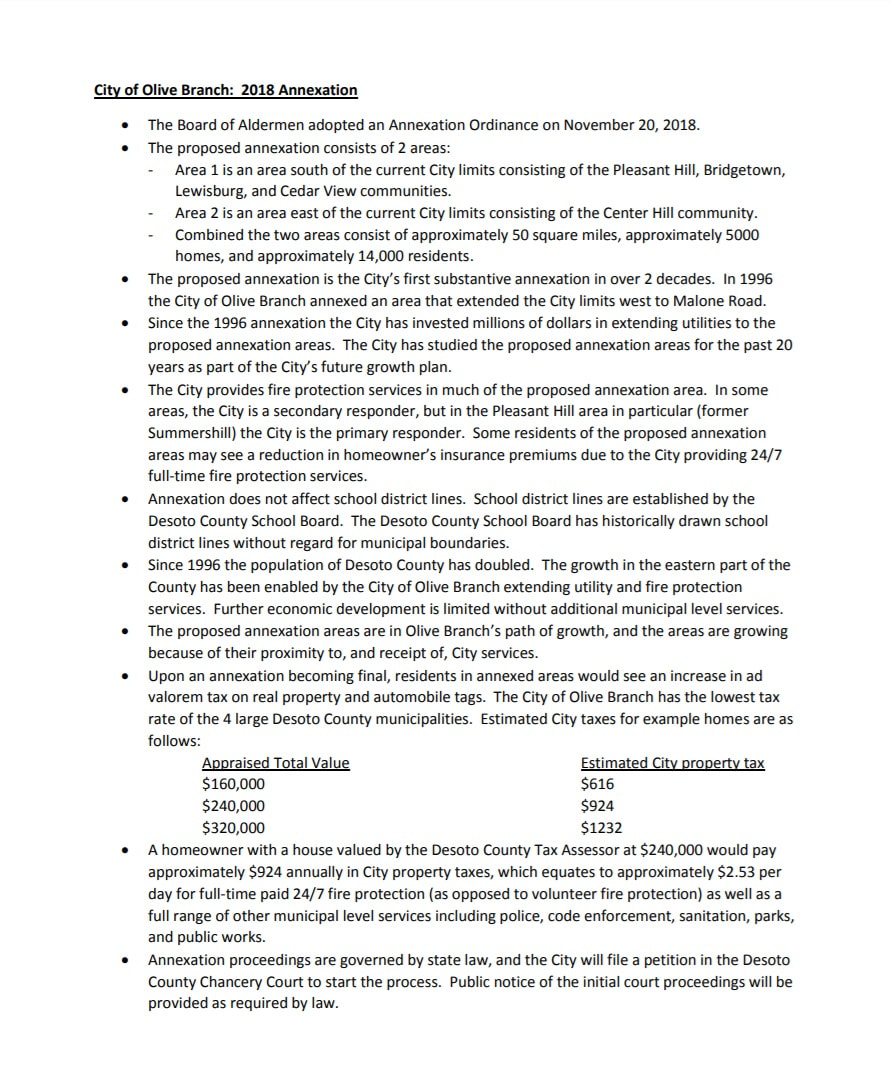